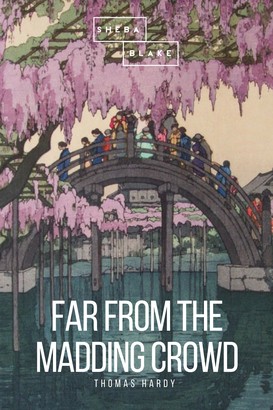 Far from the Madding Crowd

Far from the Madding Crowd is Thomas Hardy's fourth novel and his first major literary success. It originally appeared anonymously as a monthly serial in Cornhill Magazine, where it gained a wide readership. The novel is the first to be set in Hardy's fictional county of Wessex in rural south west England. It deals in themes of love, honour and betrayal, against a backdrop of the seemingly idyllic, but often harsh, realities of a farming community in Victorian England. It describes the farmer Bathsheba Everdene, her life and relationships.especially with her lonely neighbour William Boldwood, the faithful shepherd Gabriel Oak, and the thriftless soldier Sergeant Troy. On publication, critical notices were plentiful and mostly positive. Hardy revised the text extensively for the 1895 edition and made further changes for the 1901 edition. The novel was listed at number 48 on the BBC's survey The Big Read in 2003. The book finished 10th on The Guardian's list of greatest love stories of all time in 2007. The novel has been dramatised several times, notably in an Oscar-nominated 1967 film directed by John Schlesinger. Gabriel Oak is a young shepherd. With the savings of a frugal life, and a loan, he has leased and stocked a sheep farm. He falls in love with a newcomer six years his junior, Bathsheba Everdene, a proud beauty who arrives to live with her aunt, Mrs. Hurst. Over time, Bathsheba and Gabriel grow to like each other well enough, and Bathsheba even saves his life once. However, when he makes her an unadorned offer of marriage, she refuses; she values her independence too much, and him too little. Feeling betrayed and embarrassed, Gabriel offers blunt protestations that only foster her haughtiness. After a few days, she moves to Weatherbury, a village some miles off.

A Portrait of the Artist as a Young Man
James Joyce