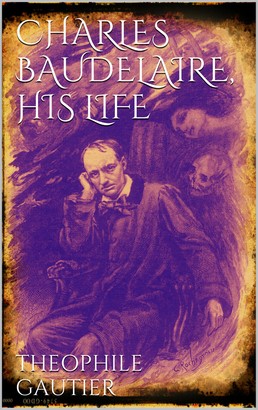 The first time that we met Baudelaire was towards the middle of the year 1849, at the Hôtel Pimodan, where we occupied, near Fernand Boissard, a strange apartment which communicated with his by a private staircase hidden in the thickness of the wall, and which was haunted by the spirits of beautiful women loved long since by Lauzun. The superb Maryx was to be found there who, in her youth, had posed for "La Mignon" of Scheffer, and later, for "La Gloire distribuant des couronnes" of Paul Delaroche; and that other beauty, then in all her splendour, from whom Clesinger modelled "La Femme au serpent," that statue where grief resembles a paroxysm of pleasure, and which throbs with an intensity of life that the chisel has never before attained and which can never be surpassed.
Charles Baudelaire was then an almost unknown genius, preparing himself in the shadow for the light to come, with that tenacity of purpose which, in him, doubled inspiration; but his name was already becoming known amongst poets and artists, who heard it with a quivering of expectation, the younger generation almost venerating him. In the mysterious upper chamber where the reputations of the future are in the making he passed as the strongest. We had often heard him spoken of, but none of his works were known to us.

William Wirt Sikes (1836-1883) was a writer and journalist who was appointed to the U.S. Counsel at Cardiff, Wales in 1876. It was there that he undertook the studying and preservation of Welsh folkore and history. He is said to have employed as many as thirty pen names during his writing life.

The Journal to Stella
Jonathan Swift