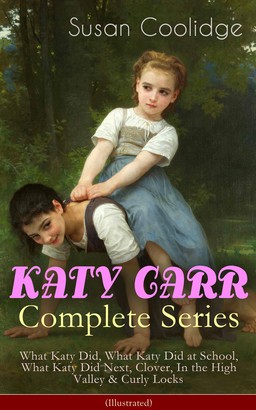 This carefully crafted ebook: "KATY CARR Complete Series: What Katy Did, What Katy Did at School, What Katy Did Next, Clover, In the High Valley & Curly Locks (Illustrated)" is formatted for your eReader with a functional and detailed table of contents.
What Katy Did is an 1872 children's book which follows the adventures of a twelve-year-old American girl, Katy Carr, and her family who live in the fictional lakeside Ohio town of Burnet in the 1860s. Katy is a tall untidy tomboy, forever getting into scrapes but wishing to be beautiful and beloved. When a terrible accident makes her an invalid, her illness and four-year recovery gradually teach her to be as good and kind as she has always wanted. Two sequels follow Katy as she grows up: What Katy Did at School and What Katy Did Next. Two further sequels relating the adventures of Katy's younger siblings were also published—Clover and In the High Valley. Also their father, Dr. Carr, a hard working doctor feature in a short story titled "Curly Locks" thus completing the entire Carr Family Chronicle.
Susan Coolidge, pen name of Sarah Chauncey Woolsey (1835–1905), was an American children's author who is best known for her Katy Carr Series. The fictional Carr family of this series was modeled after Woolsey's own family and the protagonist Katy Carr was inspired by Woolsey herself; while the brothers and sisters "Little Carrs" were modeled on her four younger siblings.

Susan Coolidge was the pen name for Sarah Chauncey, who was born in 1835 in Ohio, USA. She worked as a nurse during the American Civil War, and when that ended she started to write. She is most well known for her stories about Katy Carr, of which What Katy Did is the first in a series of five.

The Complete Emily Starr Trilogy: Emily of New Moon, Emily Climbs and Emily's Quest (Unabridged): From the author of Anne of Green Gables, Anne of Avonlea, Anne of the Island, Anne's House of Dreams, The Blue Castle, The Story Girl and more
Lucy Maud Montgomery