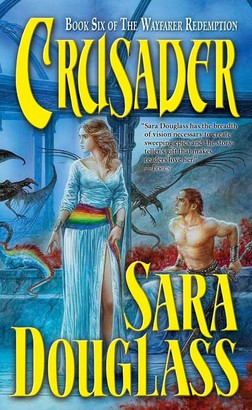 Book Six of 'The Wayfarer Redemption'

For countless millennia the Star Dance and the TimeKeeper Demons have battled their way across the universe, destroying innumerable planets, laying waste to civilizations across the cosmos.

Choosing the land of Tencendor as their last battleground, the demons break through the Star Gate. The Gate destroyed, all magic in the world is gone and the three races of Tencendor are plunged into a vortex of chaos, madness, and death.

Caelum SunSoar, son of the near-immortal Starman Axis and beloved ruler of all the land's peoples, is dead. Leaderless, those not killed outright or driven mad flee to the one place left to them, Sanctuary, a magical place created ages past to shield all who are good from the wrath of the demons.


There is for some one hope left: DragonStar, Axis's other son. Many believe he is the true StarSon, the only being that can save their world. Others are just as convinced that he is in league with the demons and will be their doom. Only DragonStar knows the truth and as he and his companions go forth to do battle he prays that he may convince all that his motives are pure.

What he does not know is that there is a traitor who plans to hand Sanctuary over to the Demons. A betrayer whose actions could force DragonStar to make a sacrifice so bloody and horrific that it could mean the destruction of everything that he holds dear in this life or the next.

And if he fails, he could doom Tecendor to an eternal hell.

Sara Douglass was born in Penola, a small farming settlement in the south of Australia, in 1957. She spent her early years chasing (and being chased by) sheep and collecting snakes before her parents transported her to the city of Adelaiden and the more genteel surroundings of Methodist Ladies College. Having graduated, Sara then became a nurse on her parents' urging (it was both feminine and genteel) and spent seventeen years planning and then effecting her escape.

That escape came in the form of a Ph.D. in early modern English history. Sara and nursing finally parted company after a lengthy time of bare tolerance, and she took up a position as senior lecturer in medieval European history at the Bendigo campus of the Victorian University of La Trobe. Finding the departmental politics of academic life as intolerable as the emotional rigors of nursing, Sara needed to find another escape.

This took the form of one of Sara's childhood loves - books and writing. After she spent some years practicing writing novels, HarperCollins Australia picked up one of Sara's novels, BattleAxe (published in North America as The Wayfarer Redemption), the first in the Tencendor series, and chose it as the lead book in their new fantasy line with immediate success. Since 1995 Sara has become Australia's leading fantasy author and one of its top novelists. Her books are now sold around the world.

A Crown of Swords
Robert Jordan

The Hero of Ages
Brandon Sanderson