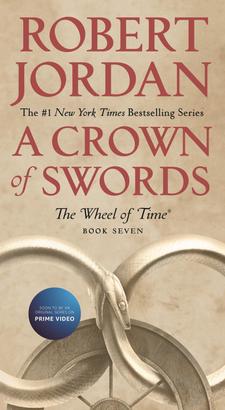 A Crown of Swords

Book Seven of 'The Wheel of Time'

Beschreibung zu „A Crown of Swords“

The Wheel of Time is now an original series on Prime Video, starring Rosamund Pike as Moiraine!

Since its debut in 1990, The Wheel of Time® by Robert Jordan has captivated millions of readers around the globe with its scope, originality, and compelling characters.

The Wheel of Time turns and Ages come and go, leaving memories that become legend. Legend fades to myth, and even myth is long forgotten when the Age that gave it birth returns again. In the Third Age, an Age of Prophecy, the World and Time themselves hang in the balance. What was, what will be, and what is, may yet fall under the Shadow.

Elayne, Aviendha, and Mat come ever closer to the bowl ter'angreal that may reverse the world's endless heat wave and restore natural weather. Egwene begins to gather all manner of women who can channel--Sea Folk, Windfinders, Wise Ones, and some surprising others. And above all, Rand faces the dread Forsaken Sammael, in the shadows of Shadar Logoth, where the blood-hungry mist, Mashadar, waits for prey.

By Robert Jordan and Amy Romanczuk
Patterns of the Wheel: Coloring Art Based on Robert Jordan's The Wheel of Time

Robert Jordan was born in 1948 in Charleston, South Carolina. He taught himself to read when he was four with the incidental aid of a twelve-years-older brother, and was tackling Mark Twain and Jules Verne by five. He is a graduate of The Citadel, the Military College of South Carolina, with a degree in physics. He served two tours in Vietnam with the U.S. Army; among his decorations are the Distinguished Flying Cross with bronze oak leaf cluster, the Bronze Star with "V" and bronze oak leaf cluster, and two Vietnamese Gallantry Crosses with palm. A history buff, he has also written dance and theater criticism and enjoyed the outdoor sports of hunting, fishing, and sailing, and the indoor sports of poker, chess, pool, and pipe collecting. Robert Jordan began writing in 1977 and went on to write The Wheel of Time®, one of the most important and best selling series in the history of fantasy publishing with over 14 million copies sold in North America, and countless more sold abroad. Robert Jordan died on September 16, 2007, after a courageous battle with the rare blood disease amyloidosis.

What the Storm Means: Prologue to the Gathering Storm
Brandon Sanderson

A Memory of Light
Robert Jordan

The Bands of Mourning
Brandon Sanderson