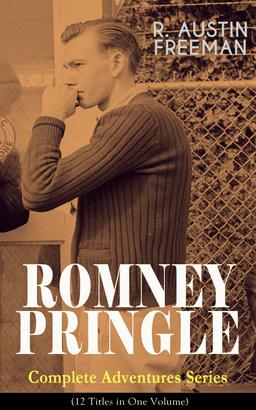 The Assyrian Rejuvenator, The Foreign Office Despatch, The Chicago Heiress, The Lizard's Scale, The Paste Diamonds, The Kailyard Novel, The Submarine Boat, The Kimblerley Fugitive and more

This carefully crafted ebook: "ROMNEY PRINGLE – Complete Adventures Series (12 Titles in One Volume)" is formatted for your eReader with a functional and detailed table of contents.
Romney Pringle is passionate bicyclist and a humble literary agent who appreciates boats and fine art. He owns a fake agency as a cover, but in fact he is a swindler and deceiver of the top rank and master of camouflage. His targets are usually other conmen and criminals, whom he tracks and defrauds them of their pray, but sometimes the ordinary people get wronged.
Richard Austin Freeman (1862-1943) was a British writer of detective stories, mostly featuring the medico-legal forensic investigator Dr. Thorndyke. He introduced the inverted detective story (a crime fiction in which the commission of the crime is described at the beginning, usually including the identity of the perpetrator, with the story then describing the detective's attempt to solve the mystery).
Table of Contents:
The Adventures of Romney Pringle
The Assyrian Rejuvenator
The Foreign Office Despatch
The Chicago Heiress
The Lizard's Scale
The Paste Diamonds
The Kailyard Novel
The Further Adventures of Romney Pringle
The Submarine Boat
The Kimblerley Fugitive
The Silkworms of Florence
The Box of Specie
The Silver Ingots
The House of Detention