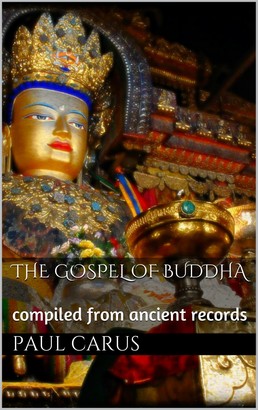 The Gospel of Buddha

Beschreibung zu „The Gospel of Buddha“

Buddhism, like Christianity, is split up into innumerable sects, and these sects not infrequently cling to their sectarian tenets as being the main and most indispensable features of their religion. The present book follows none of the sectarian doctrines, but takes an ideal position upon which all true Buddhists may stand as upon common ground. Thus the arrangement into a harmonious and systematic form is the main original feature of this Gospel of Buddha. Considering the bulk of the various details of the Buddhist canon, however, it must be regarded as a mere compilation, and the aim of the compiler has been to treat his material in about the same way as he thinks that the author of the Fourth Gospel of the New Testament utilized the accounts of the life of Jesus of Nazareth. He has ventured to present the data of the Buddha's life in the light of their religio-philosophical importance; he has cut out most of their apocryphal adornments, especially those in which the Northern traditions abound, yet he did not deem it wise to shrink from preserving the marvellous that appears in the old records, whenever its moral seemed to justify its mention; he only pruned away the exuberance of wonder which delights in relating the most incredible things, apparently put on to impress while in fact they can only tire. Miracles have ceased to be a religious test; yet the belief in the miraculous powers of the Master still bears witness to the holy awe of the first disciples and reflects their religious enthusiasm.

Dhammapada, a Collection of Verses; Being One of the Canonical Books of the Buddhists
Anonymous

The Religion of the Samurai
Kaiten Nukariya

The Influence of Buddhism on Primitive Christianity
Arthur Lillie

The Influence of Buddhism on Primitive Christianity
Arthur Lillie

The Metaphysic of Christianity and Buddhism: A Symphony
D. M. Strong