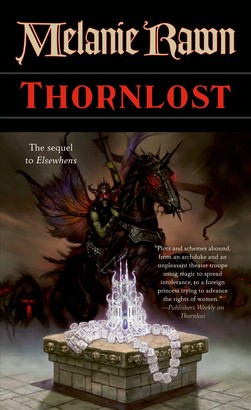 Melanie Rawn returns to her rich high fantasy world in Thornlost, the sequel to Touchstone and Elsewhens.

Cayden is part Elf, part Fae, part human Wizard—and all rebel. His aristocratic mother would have him follow his father to the Royal Court, to make a high-society living off the scraps of kings. But Cade lives and breathes for the theater, and he's good, very good. He's a tregetour—a wizard who is both playwright and magicwielder. It is Cade's power that creates the magic, but a tregetour is useless without a glisker—an elf who can spin out the magic onto the stage, to enchant the audience. And Cade's glisker, Mieka, is something special too. So is their fettler, Rafe, who controls the magic and keeps them and the audience safe. And their masker, Jeska, who speaks all the lines, is every young girl's dream.

They are reaching for the highest reaches of society and power, but not the way Cade's mother thinks they should. They'll change their world, or die trying.

MELANIE RAWN is the three-time Locus Award–nominated author of the bestselling Dragon Prince trilogy, the Dragon Star trilogy, and the Glass Thorns trilogy, including Touchstone, Elsewhens, and Thornlost. She graduated from Scripps College with a BA in history and has worked as a teacher and editor. Rawn lives in Flagstaff, Arizona.

Playing to the Gods
Melanie Rawn