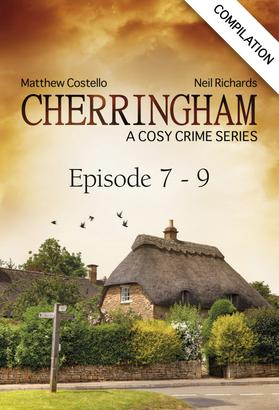 -- This compilation contains episodes 7 - 9: THE BODY IN THE LAKE, SNOWBLIND and PLAYING DEAD. Here Jack and Sarah are called to task when the body of a dignitary turns up in a lake - with all too many suspects invovled. A resident of the retirement home falls victim to the elements in one of Cherringham's worst blizzard in years - but was there something sinister at work here? And Cherringham Christmas show rehearsals spin into chaos as someone is out to sabatoge the event with deadly repercussions.

-- Cherringham is a serial novel à la Charles Dickens, with a new mystery thriller released each month. Set in the sleepy English village of Cherringham, the detective series brings together an unlikely sleuthing duo: English web designer Sarah and American ex-cop Jack. Thrilling and deadly - but with a spot of tea - it's like Rosamunde Pilcher meets Inspector Barnaby. Each of the self-contained episodes is a quick read for the morning commute, while waiting for the doctor, or when curling up with a hot cuppa.

-- Co-authors Neil Richards (based in the UK) and Matthew Costello (based in the US), are known for their script work on major computer games. The Cherringham crime series is their first fictional transatlantic collaboration.