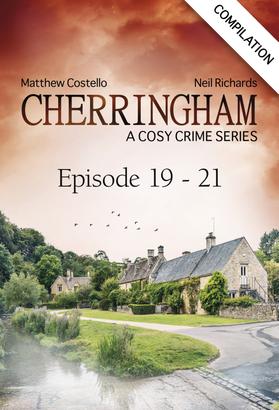 GHOST OF A CHANCE
Every Halloween, the supposedly haunted Bell Hotel hosts its famous 'Ghost-Hunters Dinner', complete with scary stories, spooky apparitions and things that go bump in the night. But this year's event ends in a terrifying accident, and suddenly everyone wonders... Is there a real ghost loose in the hotel? Jack and Sarah are convinced that the culprit must be human: who would want bad things to happen at the classic hotel? But soon they're forced to confront their own superstitions as they find themselves on the trail of an unsolved Victorian murder...

FOLLOW THE MONEY
Claire and Terry Goodman seem to have everything. Successful business. Son at Oxford. New mansion right on the River Thames. And seemingly...plenty of money to spend. But when Jack and Sarah are asked to investigate an odd robbery at their home, secrets start to emerge. And as the truth is revealed, for someone it will be too much to bear, and murder may be the only way out.

MURDER MOST WILD
When the Zakro Corporation attempts to build a mammoth supermarket outside Cherringham, the whole village is up in arms. But the accidental death of the lead environmentalist, Sam Lewis seems to hand victory to the developers. Could Sam's opposition to the project be the real reason he died? When Jack and Sarah take on the case, they will learn that what was an accident was - in fact - one very wild murder.

MATTHEW COSTELLO is an award-winning novelist, screenwriter and video game writer. His best-selling video games include The 7th Guest, Doom 3 and Pirates of the Caribbean. His horror novel, Beneath Still Waters, was filmed by Lionsgate. He also has written episodes and created TV formats for PBS, Disney, SyFy, and the BBC. He lives in Katonah, New York.