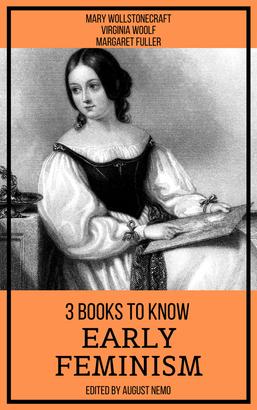 Welcome to the3 Books To Knowseries, our idea is to help readers learn about fascinating topics through three essential and relevant books.
These carefully selected works can be fiction, non-fiction, historical documents or even biographies.
We will always select for you three great works to instigate your mind, this time the topic is:Early Feminism.

- A Vindication of the Rights of Woman by Mary Wollstonecraft
- A Room of One's Own by Virginia Woolf
- Woman in the Nineteenth Century by Margaret FullerA Vindication of the Rights of Woman: with Strictures on Political and Moral Subjects (1792), written by the 18th-century British proto-feminist Mary Wollstonecraft, is one of the earliest works of feminist philosophy.
A Room of One's Own is an extended essay by Virginia Woolf, first published in September 1929. An important feminist text, the essay is noted in its argument for both a literal and figurative space for women writers within a literary tradition dominated by men.
Woman in the Nineteenth Century is a book by American journalist, editor, and women's rights advocate Margaret Fuller. Originally published in July 1843 in The Dial magazine as "The Great Lawsuit. Man versus Men. Woman versus Women", it was later expanded and republished in book form in 1845.
This is one of many books in the series 3 Books To Know. If you liked this book, look for the other titles in the series, we are sure you will like some of the topics.