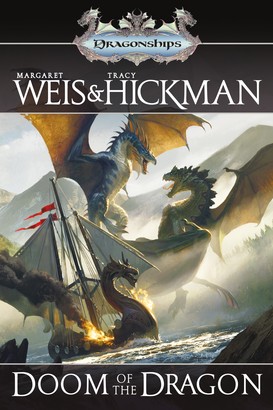 Doom of the Dragon

Buchbeschreibung zu „Doom of the Dragon“

The climatic fourth and final novel in the Dragonships of Vindras series, Doom of the Dragon, by Margaret Weis and Tracy Hickman.

In three previous novels, Skylan Ivorson overcame obstacles that would have defeated a lesser man, rising from obscurity to become the Chief of Chiefs of the fearsome Vindrasi who sail their living dragonships far and wide to raid and plunder for the glory of the gods. However, a cruel twist of fate struck him down before he and his beloved could complete their quest for the five sacred dragonbones that would summon the great dragon Ilyrion and save their people from destruction at the hands of an evil god. But even true death is denied him, and his destiny is unfulfilled.

Caught between life and death, he must lead those who journeyed with him to battle the evil god and the vast army of the god and his human emperor. Skylan must fight as he never has before to win back his life and his love, while seeking the last Spiritbone--the key to summoning the ultimate victory--before it can be snatched away by the forces of evil.

MARGARET WEIS is the longtime world-wide bestselling co-creator and co-author of The Dragonlace Chronicles, and recently, the Dragon Brigade trilogy. She worked at TSR, Inc., as a book editor for thirty years. She also is a publisher of role-playing games, including major franchises such as Serenity (Firefly) and Smallville.

Secret of the Dragon
Margaret Weis

The House of the Four Winds
Mercedes Lackey

Pathfinder Tales: Beyond the Pool of Stars
Howard Andrew Jones