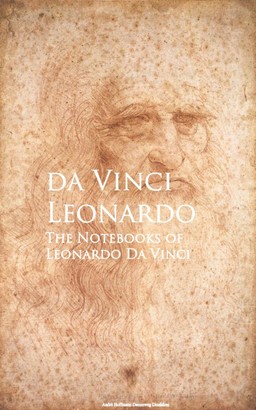 The Notebooks of Leonardo Da Vinci

A singular fatality has ruled the destiny of nearly all the most famous of Leonardo da Vinci's works. Two of the three most important were never completed, obstacles having arisen during his life-time, which obliged him to leave them unfinished; namely the Sforza Monument and the Wall-painting of the Battle of Anghiari, while the third—the picture of the Last Supper at Milan—has suffered irremediable injury from decay and the repeated restorations to which it was recklessly subjected during the XVIIth and XVIIIth centuries. Nevertheless, no other picture of the Renaissance has become so wellknown and popular through copies of every description.

Vasari says, and rightly, in his Life of Leonardo, "that he laboured much more by his word than in fact or by deed", and the biographer evidently had in his mind the numerous works in Manuscript which have been preserved to this day. To us, now, it seems almost inexplicable that these valuable and interesting original texts should have remained so long unpublished, and indeed forgotten. It is certain that during the XVIth and XVIIth centuries their exceptional value was highly appreciated. This is proved not merely by the prices which they commanded, but also by the exceptional interest which has been attached to the change of ownership of merely a few pages of Manuscript. Preface
I. Prolegomena and General Introduction to the Book on Painting
II. Linear Perspective.
III. Six books on Light and Shade.
IV. Perspective of Disappearance.
V. Theory of colours.
VI. Perspective of Colour and Aerial Perspective.
VII. On the Proportions and on the Movements of the Human Figure.
VIII. Botany for Painters and Elements of Landscape Painting.
IX. The Practice of Painting.
X. Studies and Sketches for Pictures and Decorations.
XI. The notes on Sculpture.
XII. Architectural Designs.
XIII. Theoretical writings on Architecture.
XIV. Anatomy, Zoology and Physiology.
XV. Astronomy.
XVI. Physical Geography.
XVII. Topographical Notes.
XVIII.