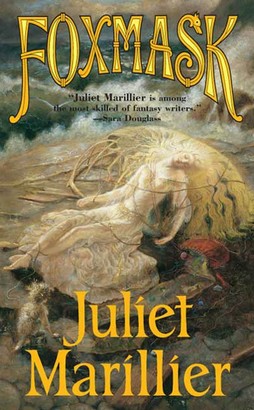 Foxmask is the second book of a fantasy duet from Juliet Marillier, weaving history and folklore into a saga of adventure, romance, and magic.

The Norseman Eyvind, a fierce and loyal Wolfskin, came to a new land on top of the world to find his destiny. With his priestess bride Nessa he saved the land and weathered the treachery that was caused by Eyvind's blood-sworn friend Somerled. After much pain and sorrow the two lovers have managed to create a society where the Norse warriors and the gentle folks of the Orkney Isles live and thrive in contentment at last. A decade and more has passed since the devastating events of the creation of the settlement and Eyvind and Nessa have watched their children grow and thrive in peace.

But not all on the islands are content or at peace. Thorvald, the young son of Margaret, widow of the slain king and Eyvind's war leader, has always felt apart and at odds with all he knows. He learns upon his coming to manhood that he is not his father's son but that of the love that Margaret bore for the hated Somerled and that Somerled was not killed for his treachery but sent on a boat, adrift with little more than a knife and skein of water, doomed to the god's will. Thorvald is determined to find a boat and cast off to the West in a desperate bid to find a father he never knew...and to find out if he is made of the same stuff as the heinous traitor.

The tragedy of this scheme would be horrific enough...if it were not for the fact that Creidhe, the winsome daughter of Eyvind and Nessa has loved Thorvald since birth and unbeknownst to him conspires to go along on this most perilous of quests.

What happens to them on their journey of discovery will ultimately change the lives of all they know and love...and will doom (or redeem) an entire people.