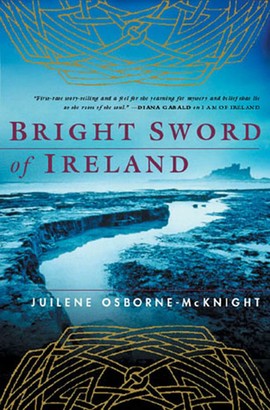 Bright Sword of Ireland is the third in Juilene Osborne-McKnight's wonderful retelling of cherished Irish folktales. A dedicated researcher into the origins of Celtic myth and legend, Osborne-McKnight infuses her stories with passion, romance and magic.
Her focus this time is the great warrior queen Medb of Connaught. Beautiful. Bold in battle . . . and in bed. A legend among her people, she lusts for the Brown Cow of Cuailnge for the power and the glory that it would bring to her. And she will use anyone, do anything, to reach her goal. Who should stand in her way? None other than the fabled hero Cuchulainn, thought to be not quite of this world and who is said to able to use the spirits of the forest and glen to conquer his enemies. Noble tales, ignoble deeds.
But sometimes the biggest part of an epic tale comes not from the biggest players on the stage. What happens to those who have grown up in the shadow of greatness? And who pays when the game of power calls for sacrifice?
Young Finnabair is the daughter of mighty queen Medb. Not a beauty. Not a warrior. And one who is seen as a pawn for her mother to use as she will. But Finnabair rebels when she sees that her part in her mother's schemes for power has caused pain and shame to her people.
In doing so, Finnabair will embark on a journey that will change two kingdoms . . . and bring her love and loss so great as to break the hearts of the gods.

Irish Above All
Mary Pat Kelly