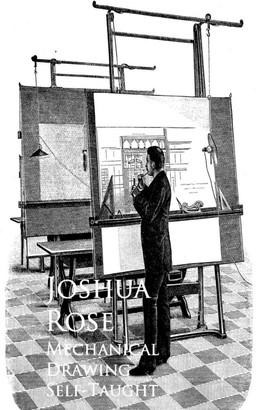 The object of this book is to enable the beginner to learn to make simple mechanical drawings without the aid of an instructor, and to create an interest in the subject by giving examples such as the machinist meets with in his every-day workshop practice. The plan of representing in many examples the pencil lines, and numbering the order in which they are marked, the author believes to possess great advantages for the learner, since it is the producing of the pencil lines that really proves the study, the inking in being merely a curtailed repetition of the pencilling. Similarly when the drawing of a piece, such, for example, as a fully developed screw thread, is shown fully developed from end to end, even though the pencil lines were all shown, yet the process of construction will be less clear than if the process of development be shown gradually along the drawing. Thus beginning at an end of the example the first pencil lines only may be shown, and as the pencilling progresses to the right-hand, the development may progress so that at the other or left-hand end, the finished inked in and shaded thread may be shown, and between these two ends will be found a part showing each stage of development of the thread, all the lines being numbered in the order in which they were marked. This prevents a confusion of lines, and makes it more easy to follow or to copy the drawing.

[iv] It is the numerous inquiries from working machinists for a book of this kind that have led the author to its production, which he hopes and believes will meet the want thus indicated, giving to the learner a sufficiently practical knowledge of mechanical drawing to enable him to proceed further by copying such drawings as he may be able to obtain, or by the aid of some of the more expensive and elaborate books already published on the subject.