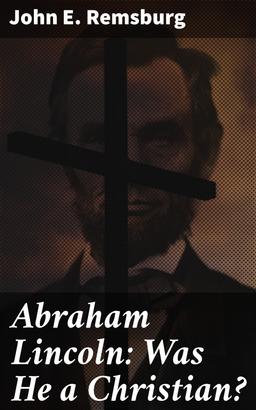 Abraham Lincoln: Was He a Christian?

Beschreibung zu „Abraham Lincoln: Was He a Christian?“

Almost immediately after the remains of America's most illustrious son were laid to rest at Springfield, one of his biographers put forward the claim that he was a devout believer in Christianity. The claim was promptly denied by the dead statesman's friends, but only to be renewed again, and again denied. And thus for a quarter of a century the question of Abraham Lincoln's religious belief has been tossed like a battledoor from side to side. As a result of this controversy, thousands have become interested in a subject that otherwise might have excited but little interest. This is the writer's apology for collecting the testimony of more than one hundred witnesses, and devoting more than three hundred pages to the question, "Was Lincoln a Christian?" The writer believes that he has fully established the negative of the proposition that forms the title of his book. He does not expect to silence the claims of the affirmative; but he has furnished an arsenal of facts whereby these claims may be exposed and refuted as often as made. This effort to prove that Lincoln was not a Christian will be condemned by many as an attempt to fasten a stain upon this great man's character. But the demonstration and perpetuation of this fact will only add to his greatness. It will show that he was in advance of his generation. The fame of Abraham Lincoln belongs not to this age alone, but will endure for all time.

Ähnliche Titel wie „Abraham Lincoln: Was He a Christian?“

The Backwoods Boy; or, The Boyhood and Manhood of Abraham Lincoln
Jr. Horatio Alger

The Life of Abraham Lincoln, from His Birth to His Inauguration as President
Ward Hill Lamon