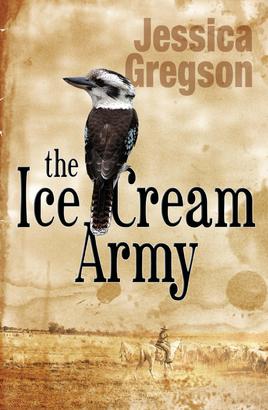 Following an arduous and tragic sea journey to Australia, Hamil travels into the outback to find work and is taken in by a fellow Turkish immigrant. Initially they are widely accepted into the community as ice cream sellers and Halim as a Halal butcher. Supported by an ambitious teacher they look to offer lessons to the large migrant camp.
However, as war breaks out, relations are strained and racial prejudice and violence replace previous acceptance. With the level of attack escalating and faced with being forced out of their home, the two men see only one option, leading to the peace of the community being irrevocably shattered.

Jessica Gregson, 28, has a degree in Anthropology from Cambridge and a Masters in Development from LSE. Jessica has worked as a policy advisor for the home office and a humanitarian worker in Sudan. Jessica has just started a PhD at SOAS in London. Jessica is the author of Angel Makers (2007) and The Ice Cream Army (2009)

gabi – 05.03.2017
excellent reading, beautiful language, great story. i have lived in moslem countries for many years and was pleased about the acurate description of moslem religious belives and traditions. described full of respect and understanding, i am truely impressed by the authors empathy.

The Life of a Banana
PP Wong

From This Moment On (The Sullivans 2)
Bella Andre

The Harder They Fall
Trish Jensen

Blame It on Paris
Laura Florand