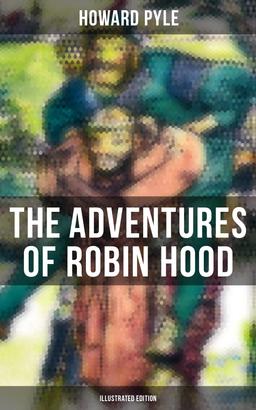 Robin Hood is a legendary heroic outlaw originally depicted in English folklore and subsequently featured in literature and film. According to legend, he was a highly skilled archer and swordsman. In some versions of the legend, he is depicted as being of noble birth and said to have robbed from the rich and given to the poor. So come along on this fantastic adventure and relive the life of the most controversial figure and his band of merry men. This meticulously edited collection is formatted for your eReader with a functional and detailed table of contents:
How Robin Hood Came to Be an Outlaw
Robin Hood and Tinker
The Shooting Match at Nottingham Town
Will Stutely Rescued by His Companions
Robin Hood Turns Butcher
Little John Goes to Nottingham Fair
How Little John Lived at the Sheriff's
Little John and the Tanner of Blyth
Robin Hood and Will Scarlett
The Adventure with Midge the Miller's Son
Robin Hood and Allan a Dale
Robin Hood Seeks the Curtal Friar
Robin Hood Compasses a Marriage
Robin Hood Aids a Sorrowful Knight
How Sir Richard of the Lea Paid His Debt
Little John Turns Barefoot Friar
Robin Hood Turns Beggar
Robin Hood Shoots Before Queen Eleanor
The Chase of Robin Hood
Robin Hood and Guy of Gisbourne
King Richard Comes to Sherwood Forest

The Fables of Aesop
Aesop