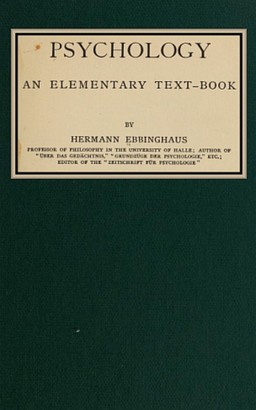 Psychology has a long past, yet its real history is short. For thousands of years it has existed and has been growing older; but in the earlier part of this period it cannot boast of any continuous progress toward a riper and richer development. In the fourth century before our era that giant thinker, Aristotle, built it up into an edifice comparing very favorably with any other science of that time. But this edifice stood without undergoing any noteworthy changes or extensions, well into the eighteenth or even the nineteenth century. Only in recent times do we find an advance, at first slow but later increasing in rapidity, in the development of psychology.
The general causes which checked the progress of this science and thus made it fall behind the others can readily be stated:—
"The boundaries of the Soul you cannot find, though you pace off all its streets, so deep a foundation has it," runs a sentence of Heraclitus, and it hits the truth more fully than its author could ever have expected. The structures and functions of our mental life present the greatest difficulties to scientific investigation, greater even than those presented by the phenomena, in many respects{4} similar, of the bodily life of the higher organisms. These structures and processes change so unceasingly, are so fleeting, so enormously complex, and dependent on so many factors hidden yet undoubtedly influential, that it is difficult even to seize upon them and describe their true substance, still more difficult to gain an insight into their causal connections and to understand their significance. We are just now beginning to recognize the full force of these difficulties.

How to Get the most out of Life
Kerstin Hack

How To Overcome Depressions By Yourself
Sonja Schoch