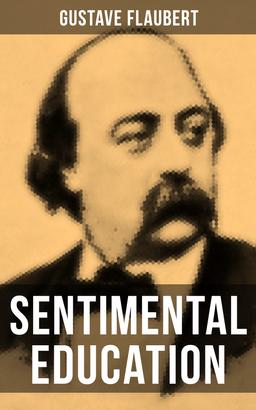 An Autobiographical Novel (From the prolific French writer, known for his debut novel Madame Bovary, works like Salammbô, November, A Simple Heart & Herodias)

This eBook edition of "Sentimental Education" has been formatted to the highest digital standards and adjusted for readability on all devices.
Sentimental Education is an autobiographical novel. The story focuses on the romantic life of a young man at the time of the French Revolution of 1848. The novel describes the life of a young man (Frédéric Moreau) living through the revolution of 1848 and the founding of the Second French Empire, and his love for an older woman. Flaubert based many of the protagonist's experiences (including the romantic passion) on his own life. The novel's tone is by turns ironic and pessimistic; it occasionally lampoons French society. The main character, Frédéric, often gives himself to romantic flights of fancy. Gustave Flaubert (1821-1880) was an influential French writer who was perhaps the leading exponent of literary realism of his country. He is known especially for his debut novel, Madame Bovary and for his scrupulous devotion to his style and aesthetics. The celebrated short story writer Maupassant was a protégé of Flaubert.