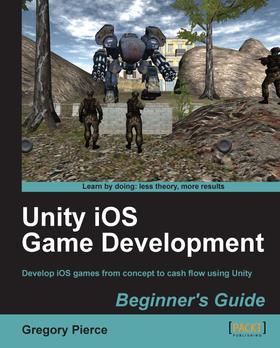 Would you like to create money making games for iOS? If so, Unity iOS Game Development Beginners Guideis for you. It will guide you through the entire creative process of designing a game through to making money from it.

This book will teach you the secrets of building and monetizing games for the iOS platform using the latest version of Unity. The book is linear and progressive so every chapter builds upon the knowledge of the last. You will learn Unity and the iOS basics necessary to get started. You will design a game for the iOS. You will build that game feature by feature. Finally you will publish your game and add the features that will enable your game to generate revenue.

You have never built anything using Unity or iOS so we will begin with the basics. We will then move onto the basic features of a game: scenes, AI, characters, accelerometer, and input methods. Once you have mastered this we will begin the creation of our game - a 3rd person perspective dungeon crawler game inspired by the arcade game called Gauntlet. You will bring AAA quality to the game by adding co-op multiplayer so that your friends can join in and participate in the game. You will also add occlusion culling and beastmap lighting. Next you will integrate the game with some 3rd party services for advertisements, micro transactions, and in app purchasing. You will also integrate with Game Center. Finally you will publish your game for the entire world to see.

This step-by-step book guides you through the process of using Unity to create monetized iOS games. It will get you through all the major learning points in a smooth, logical order. Youwill also learn how to avoid some common pitfalls.

This book is for developers and designers who want to learn the process of building commercial game applications using Unity. It is intended for novices through to intermediate developers of all types regardless of their skill level with Unity.

Gregory Pierce has worked in software development and executive management, across a variety of high-technology industries, for over 18 years. Gregory started his professional computer software career as a software test engineer for the Microsoft Corporation in 2002. Since then he has gained experience across a variety of industries; while working in the defense and space industry for Sytex, Director of Research and Development for Bethesda Softworks and Zenimax Media, Software Architect for the Strategic Applications group within CNN, and later Time Warner, Technology Evangelist at JBoss/Red Hat, Vice President of Technology for Blockbuster, and finally Director of Global Software Development for the Intercontinental Hotels Group. A published technical author, Gregory has used his experience to give back to communities by lecturing on a variety of technology subjects, contributing to open source projects, and participating in organizations such as Junior Achievement. Gregory holds an MBA in Global Business from the Georgia Institute of Technology and a BS in Computer Science from Xavier University of Louisiana. In this book, many of the chapters and artwork contained herein are commissioned by Sojourner Mobile, provider of the monetization platform that has made it all possible. He co-authored Direct3D Professional Reference during the early days of DirectX.