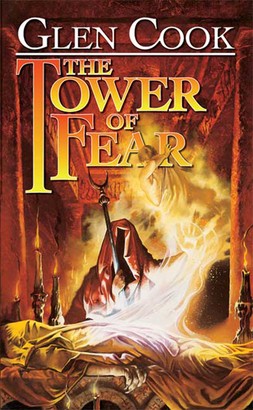 The Tower of Fear

Buchbeschreibung zu „The Tower of Fear“

The City of Qushmarrah is uneasy under the rule of the Herodians —short, balding men whose armies would never have conquered the city had not the great and evil wizard Narkar been killed and sealed in his citadel; had not the savage nomad Datars turned coat and sided with the invaders; had not some traitor opened the fortress to them.

Born in 1944, Glen Cook grew up in northern California, served in the U.S. Navy, attended the University of Missouri, and was one of the earliest graduates of the well-known "Clarion" workshop SF writers. Since 1971 he has published a large number of Science Fiction and fantasy novels, including the "Dread Empire" series, the occult-detective "Garrett" novels, and the very popular "Black Company" sequence that began with the publication of The Black Company in 1984. Among his science fiction novels is A Passage at Arms.

After working many years for General Motors, Cook now writes full-time. He lives near St. Louis, Missouri, with his wife Carol.

Come Back to the Sea
Jason Vanhee