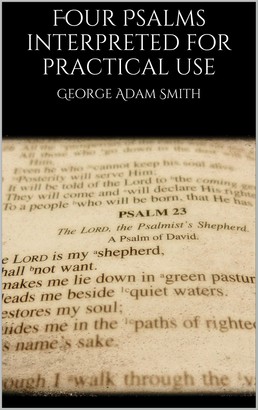 Four Psalms interpreted for practical use

The twenty-third Psalm seems to break in two at the end of the fourth verse. The first four verses clearly reflect a pastoral scene; the fifth appears to carry us off, without warning, to very different associations. This, however, is only in appearance. The last two verses are as pastoral as the first four. If these show us the shepherd with his sheep upon the pasture, those follow him, shepherd still, to where in his tent he dispenses the desert's hospitality to some poor fugitive from blood. The Psalm is thus a unity, even of metaphor. We shall see afterwards that it is also a spiritual unity; but at present let us summon up the landscape on which both of these features-the shepherd on his pasture and the shepherd in his tent-lie side by side, equal sacraments of the grace and shelter of our God.

The Hermetic Codex of the Illuminati
Karl Eckartshausen