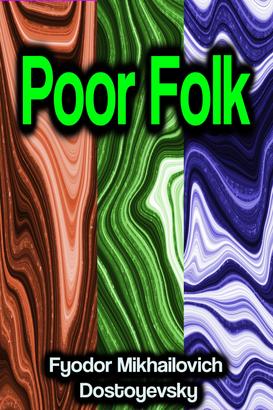 Poor Folk Fyodor Mikhailovich Dostoyevsky - Poor Folk (Russian: , Bednye lyudi), sometimes translated as Poor People, is the first novel by Fyodor Dostoevsky, written over the span of nine months between 1844 and 1845. Dostoevsky was in financial difficulty because of his extravagant lifestyle and his developing gambling addiction; although he had produced some translations of foreign novels, they had little success, and he decided to write a novel of his own to try to raise funds.Inspired by the works of Gogol, Pushkin and Karamzin, as well as English and French authors, Poor Folk is written in the form of letters between the two main characters, Makar Devushkin and Varvara Dobroselova, who are poor third cousins twice removed.