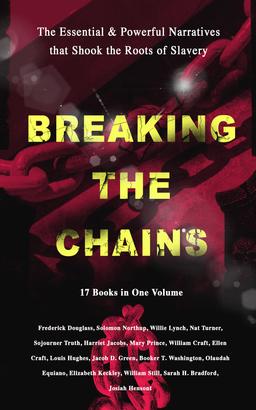 Memoirs of Frederick Douglass, Underground Railroad, 12 Years a Slave, Incidents in Life of a Slave Girl, Narrative of Sojourner Truth, Running A Thousand Miles for Freedom and many more

This unique collection consists of the most influential memoirs - powerful & unflinching narratives of former slaves and stories of people who helped them; including records and letters which unfold all the hardship, hair-breadth escapes and death struggles of the slaves in their efforts to reach freedom:
Narrative of Frederick Douglass, an American Slave, Freedom Fighter & Statesman
12 Years a Slave - Memoir of Solomon Northup, a Free-Born African American Who Was Kidnapped and Sold into Slavery
The Underground Railroad (William Still) - stories of 649 slaves who escaped to freedom through a secret network formed by abolitionists and former slaves
Harriet: The Moses of Her People – Story of the Woman Who Led Hundreds of Slaves to Freedom as the Conductor on the Underground Railroad
Incidents in the Life of a Slave Girl (Harriet Jacobs)
Narrative of Sojourner Truth - leading abolitionist and women's rights activist
The Narrative of the Life of Olaudah Equiano - Former Slave, Seaman & Freedom Fighter
Up From Slavery, by Booker T. Washington - the Visionary Educator, Leader and Civil Rights Activist
The History of Mary Prince, a West Indian Slave – Memoir that Influenced the Anti-Slavery Cause of British Colonies
Father Henson's Story of His Own Life – by Josiah Henson who was the inspiration for the character of Tom in Uncle Tom's Cabin
Uncle Tom's Cabin, anti-slavery influential novel which made a crucial impact on America's conscience by illustrating slavery's affect on families
The Willie Lynch Letter: The Making of Slave!
The Confessions of Nat Turner
The History of Mary Prince, a West Indian Slave - Autobiography that Influenced the Anti-Slavery Cause of British Colonies
Running a Thousand Miles for Freedom (William and Ellen Craft)
Thirty Years a Slave: From Bondage to Freedom (Louis Hughes)
Narrative of the Life of J. D. Green, a Runaway Slave (Jacob D. Green)
Behind The Scenes: 30 Years a Slave & 4 Years in the White House (Elizabeth Keckley)