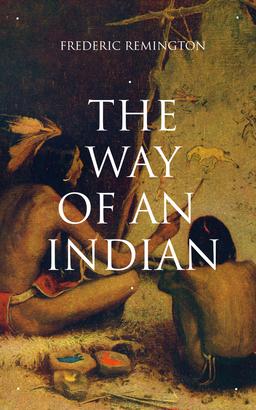 THE WAY OF AN INDIAN

Beschreibung zu „THE WAY OF AN INDIAN“

"The Way of an Indian" is one of the few books that look at the colonial expansion of American wild west through the eyes of a Native Indian. The book faithfully captures their spiritual beliefs, agency and speech to show what it was like to be the original inhabitants of a land that was taken away from them. A must read western classic!
Excerpt:
"White Otter's heart was bad. He sat alone on the rim-rocks of the bluffs overlooking the sunlit valley. To an unaccustomed eye from below he might have been a part of nature's freaks among the sand rocks. The yellow grass sloped away from his feet mile after mile to the timber, and beyond that to the prismatic mountains...."
Frederic Remington was an American painter, illustrator, sculptor, and writer who specialized in depictions of the Old American West, specifically concentrating on the last quarter of the 19th-century American West and images of cowboys, American Indians, and the U. S. Cavalry. Remington's fame made him a favorite of the Western Army officers fighting the last Indian battles.

Ähnliche Titel wie „THE WAY OF AN INDIAN“

The Way of an Indian (Western Classic)
Frederic Remington

The Last of the Mohicans
James Fenimore Cooper

Dorothy and the Wizard in Oz
Lyman Frank Baum

The Rangeland Avenger, Above the Law & Alcatraz (3 Wild West Adventures in One Edition)
Max Brand