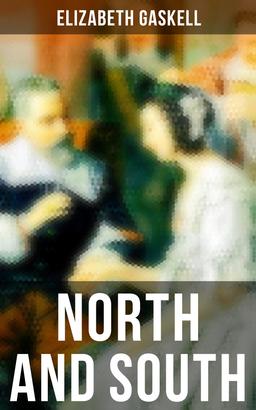 Victorian Romance Classic (Including Biography of the Author)

This eBook edition of "North and South" has been formatted to the highest digital standards and adjusted for readability on all devices.
Forced to leave her home in the tranquil, rural south, Margaret Hale settles with her parents in Milton. She witnesses the brutal world wrought by the Industrial Revolution, seeing employers and workers clashing in the first strikes. Sympathetic to the poor (whose courage and tenacity she admires and among whom she makes friends), she clashes with John Thornton: a nouveau riche cotton-mill owner who is contemptuous of his workers. The story traces her growing understanding of the complexity of labor relations and their impact on well-meaning mill owners and her conflicted relationship with John Thornton.
Elizabeth Gaskell (1810-1865) was an English novelist and short story writer. Her novels offer a detailed portrait of the lives of many strata of Victorian society, including the very poor, and are of interest to social historians as well as lovers of literature. Some of Gaskell's best known novels are Cranford, North and South, and Wives and Daughters.