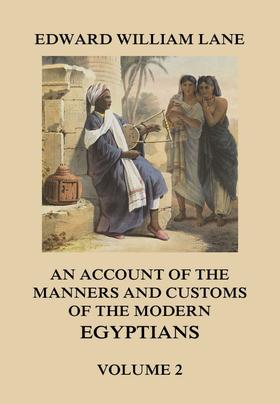 An Account of The Manners and Customs of The Modern Egyptians, Volume 2

Beschreibung zu „An Account of The Manners and Customs of The Modern Egyptians, Volume 2“

It is now more than one hundred years since Lane gave to the world his admirable work on the Egyptians. It has become a classic, and no writer has given us such unsurpassed descriptions of the manners and customs of the people. Lane went to Egypt in 1825, and adopting the native customs, and with a good knowledge of Arabic, he mingled with the people, living at one time in a tomb, with bones, rags, and mummies for his companions. He associated, almost exclusively, with Moslems, of various ranks in society, lived as they lived, conforming with their general habits and their religious ceremonies, and abstaining from the use of the knife and fork at meals. He ascended the Nile to the Second Cataract, and everywhere recording his exact impressions, making plans and careful drawings, and taking the trouble to secure accurate knowledge. A second trip to Egypt, remaining two years, enabled him to still more completely enter into the life of the Egyptians. Upon his return to England he published this book. Its success was immediate, and many editions have been called for since. This is volume two out of two.

Ähnliche Titel wie „An Account of The Manners and Customs of The Modern Egyptians, Volume 2“

The City of the Caliphs
Eustace Alfred Reynolds Ball

A Thousand Miles Up The Nile
Amelia Ann Blandford