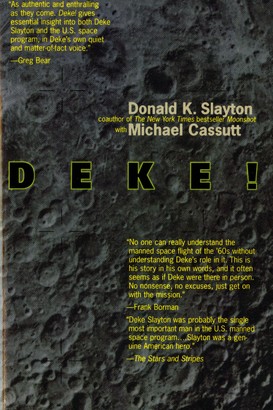 From Mercury To the Shuttle

Deke! is Deke Slayton's' story--told in his own words and in the voices of the men and women who worked with him and knew him best. Deke Slayton's knowledge of how the .S. manned space program worked is the missing piece of every space buff's puzzle. Now, after decades of silence, he tells his priceless stories of those years when American was engaged in the greatest voyage of exploration in human history.

Michael Cassutt is noted for his writing about the space program -- not only articles in magazines such as Space World, but a massive biographical encyclopedia, Who's Who in Space. Cassutt is the author of two previous mystery thrillers set within the space program, Missing Man and Red Moon. He lives in Los Angeles, CA.

Diary Of A Nursing Sister On The Western, 1914
Author Anonymous

Once Were Radicals
Irfan Yusuf

All I Know
Mary Coustas