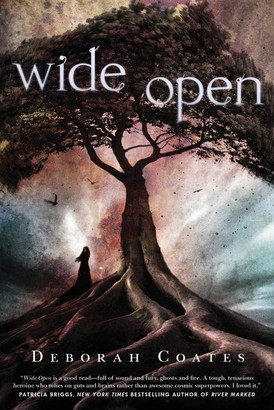 Wide Open by Deborah Coates is the first book in a series of "startlingly original" (Booklist) contemporary fantasy novels set against the sweeping prairies and desolate byways of the American Midwest, creating "a rural backwater where the normal and paranormal seamlessly merge." (Publishers Weekly)

When Sergeant Hallie Michaels comes back to South Dakota from Afghanistan on ten days' compassionate leave, her sister Dell's ghost is waiting at the airport to greet her.

The sheriff says that Dell's death was suicide, but Hallie doesn't believe it. Something happened or Dell's ghost wouldn't still be hanging around. Friends and family, mourning Dell's loss, think Hallie's letting her grief interfere with her judgment.

The one person who seems willing to listen is the deputy sheriff, Boyd Davies, who shows up everywhere and helps when he doesn't have to.

As Hallie asks more questions, she attracts new ghosts, women who disappeared without a trace. Soon, someone's trying to beat her up, burn down her father's ranch, and stop her investigation.

Hallie's going to need Boyd, her friends, and all the ghosts she can find to defeat an enemy who has an unimaginable ancient power at his command.

Wide Open has been nominated for the Bram Stoker Award for Superior Achievement in a First Novel, appeared on Locus Magazine's Recommended Reading List for first novels, and was chosen as a Tor.com Reviewer's Choice Pick for Favorite Book of the year. The Magazine of Fantasy & Science Fiction claimed that it is "one of the best first novels I've read in a long time" and Library Journal agrees that "fans of urban fantasies should enjoy the kick-ass [heroine]."

DEBORAH COATES, author of Wide Open and Deep Down, lives in Ames, Iowa, and works for Iowa State University. Her short fiction has appeared in Asimov's and Strange Horizons, as well as Year's Best Fantasy 6, Best Paranormal Romance, and Best American Fantasy.