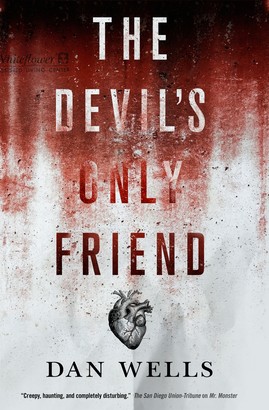 The Devil's Only Friend

Buchbeschreibung zu „The Devil's Only Friend“

John Wayne Cleaver hunts demons: they've killed his neighbors, his family, and the girl he loves, but in the end he's always won. Now he works for a secret government kill team, using his gift to hunt and kill as many monsters as he can . . .

. . . but the monsters have noticed, and the quiet game of cat and mouse is about to erupt into a full scale supernatural war.

When John again faces evil, he'll know what he has to do.
The Devil's Only Friend is the first book in a brand-new John Wayne Cleaver trilogy by New York Times bestselling author Dan Wells.

DAN WELLS writes a little bit of everything, but he is best known for the Partials Sequence and the John Cleaver series, the first book of which is now a major motion picture. He is a co-host of the educational podcast Writing Excuses, for which he won a Hugo and now helps run a yearly, week-long writing conference. In addition to novels, novellas, and shorts, he has also written and produced a stage play, called "A Night of Blacker Darkness," and works as a staff writer on the TV show "Extinct." He has lived in the US, Mexico, and Germany, and currently resides in Utah with his wife and six children and 439 board games.

I Don't Want to Kill You
Dan Wells

1 Kommentar zu „The Devil's Only Friend“