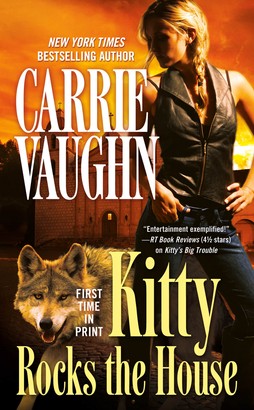 On the heels of Kitty's return from London, a new werewolf shows up in Denver, one who threatens to split the pack by challenging Kitty's authority at every turn. The timing could not be worse; Kitty needs all the allies she can muster to go against the ancient vampire, Roman, if she's to have any hope of defeating his Long Game. But there's more to this intruder than there seems, and Kitty must uncover the truth, fast. Meanwhile, Cormac pursues an unknown entity wreaking havoc across Denver; and a vampire from the Order of St. Lazaurus tempts Rick with the means to transform his life forever.

Carrie Vaughn is best known for her New York Times bestselling series of novels about a werewolf named Kitty who hosts a talk radio show for the supernaturally disadvantaged. Her novels include a near-Earth space opera, Martians Abroad, from Tor Books, and the post-apocalyptic murder mysteries Bannerless and The Wild Dead. She's written several other contemporary fantasy and young adult novels, as well as upwards of 80 short stories, two of which have been finalists for the Hugo Award. She's a contributor to the Wild Cards series of shared world superhero books edited by George R. R. Martin and a graduate of the Odyssey Fantasy Writing Workshop. An Air Force brat, she survived her nomadic childhood and managed to put down roots in Boulder, Colorado.