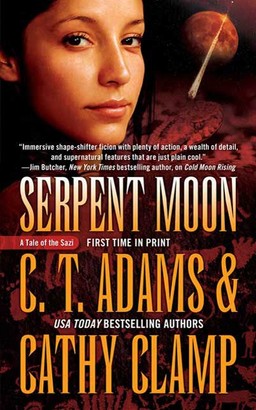 A Tale of the Sazi

Eric Thompson's wolf howl can ruin electronics and send aircraft tumbling from the sky. Considered dangerous even by his fellow Sazi, Eric has become a lone wolf, living in self-imposed isolation. Yet when the very foundations of Sazi life come under attack, Eric knows he must defend his fellow shapeshifters at any cost.

Attacked by a band of vicious Sazi, Holly Sanchez should have died. Instead, she survives, emerging as a powerful Sazi healer. Sent to return Eric to the Sazi world he rejected, Holly finds herself by his side as the lone wolf tracks the monster that is killing the Sazi. Holly soon realizes she must make a choice—between a Sazi life with Eric, and life as a "normal" human being. But first, she must survive long enough to make that choice—and she must save her people, and the world, from evil.

Cat Adams is the author of the much-lauded Blood Singer series, which began with Blood Song and continued with Siren Song and Demon Song. Adams is the joint pen-name of C.T. Adams and Cathy Clamp, who live deep in the heart of Texas. They are USA Today bestselling authors with their Sazi series.