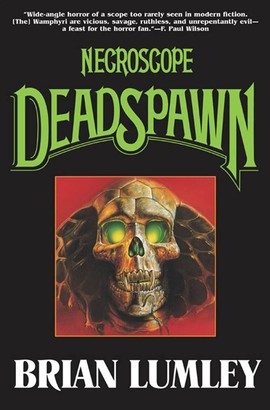 Brian Lumley's Necroscope novels are one of the horror genre's most towering achievements. The adventures of the Necroscopes, Harry Keogh and his successor, Jake Cutter, and the psychically gifted agents of E-Branch, Britain's super-secret spy organization, as they battle malevolent, shape-shifting Wamphyri have spanned two worlds, thirteen novels, and an infinity of time. The Necroscope novels have sold more than two million copies in English alone.

Necroscope: Deadspawn is the fifth spine-tingling volume in Lumley's exciting vampire series and marks a turning point in the life and career of Harry Keogh, the original Necroscope.
After the battles of Deadspeak, Harry has recovered his Necroscopic abilities. He can once again travel instantly between places and times via the marvelous mathematics of the Möbius Continuum. He can once again hear and speak to the dead and carry messages between the living and those long gone.
But the Necroscope's bargain with Faethor Ferenczy, father of vampires, has sown the seed of Harry's downfall---a vampire seed! Deep in the recesses of Harry's mind, a vampire grows, a vampire that might someday be the greatest Wamphyri of all, one with all the Necroscope's great psychic powers warped to evil use.
Harry's lifetime on earth has just become sharply limited. But until he loses the fight against the vampire thing, the Necroscope still has work to do. The tortured victims of a serial killer and necromancer cry out for justice. Harry Keogh is the only person who can identify and find this vile murderer. And he will do it, fighting the vampire spawn inside him every step of the way.

Brian Lumley is a Grand Master of Horror and a winner of the British Fantasy Award. His many novels, including Necroscope, have been published in more than thirteen countries around the world. He lives in England with his wife, Barbara Ann.

The Barrow Will Send What it May
Margaret Killjoy