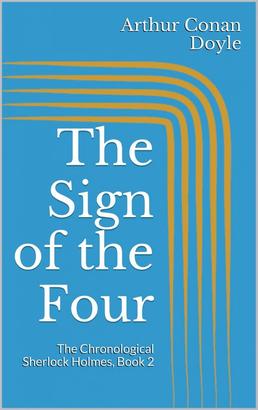 This is Book 2 of the series "The Chronological Sherlock Holmes".

"The Sign of the Four" (1890), also called "The Sign of Four", is the second novel featuring Sherlock Holmes written by Sir Arthur Conan Doyle. Doyle wrote four novels and 56 stories starring the fictional detective. The story is set in 1888. "The Sign of the Four" has a complex plot involving service in East India Company, India, the Indian Rebellion of 1857, a stolen treasure, and a secret pact among four convicts ("the Four" of the title) and two corrupt prison guards. It presents the detective's drug habit and humanizes him in a way that had not been done in the preceding novel "A Study in Scarlet" (1887). It also introduces Doctor Watson's future wife, Mary Morstan.

Sir Arthur Conan Doyle was born in Edinburgh in 1859 and died in 1930. Within those years was crowded a variety of activity and creative work that made him an international figure and inspired the French to give him the epithet 'the good giant'. He was the nephew of 'Dickie Doyle' the artist, and was educated at Stonyhurst, and later studied medicine at Edinburgh University, where the methods of diagnosis of one of the professors provided the idea for the methods of deduction used by Sherlock Holmes.

The Hound of the Baskervilles
Arthur Conan Doyle