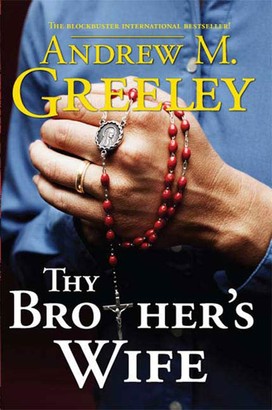 The direction of Paul and Sean Cronin's lives was shaped the day their father, a self-made multimillionaire, decided that one of his boys would grow up to be a cardinal while the other would become president of the United States.

For his elder son, Paul, the father had even chosen a wife—the beautiful Nora, who had come to the Cronin home as an orphan child years before. Obediently, and with a genuine vocation, the younger son, Sean, went into the priesthood. With a more cynical view, Paul went to Notre Dame to prepare for a life in politics until the Korean War intervened. Then came the news—Paul Cronin was missing in action.

"If he dies," Sean's father told him, "you must leave the seminary and marry Nora." The words sang in Sean's head. Could he renounce his sacred calling—and marry the girl he had always loved?

Long out of print, Thy Brother's Wife is a classic tale by one of America's most loved storytellers.

Priest, sociologist, author and journalist, Father Andrew M. Greeley built an international assemblage of devout fans over a career spanning five decades. His books include the Bishop Blackie Ryan novels, including The Archbishop in Andalusia, the Nuala Anne McGrail novels, including Irish Tweed, and The Cardinal Virtues. He was the author of over 50 best-selling novels and more than 100 works of non-fiction, and his writing has been translated into 12 languages.

Father Greeley was a Professor of Sociology at the University of Arizona and a Research Associate with the National Opinion Research Center (NORC) at the University of Chicago. In addition to scholarly studies and popular fiction, for many years he penned a weekly column appearing in the Chicago Sun-Times and other newspapers. He was also a frequent contributor to The New York Times, the National Catholic Reporter, America and Commonweal, and was interviewed regularly on national radio and television. He authored hundreds of articles on sociological topics, ranging from school desegregation to elder sex to politics and the environment.

Throughout his priesthood, Father Greeley unflinchingly urged his beloved Church to become more responsive to evolving concerns of Catholics everywhere. His clear writing style, consistent themes and celebrity stature made him a leading spokesperson for generations of Catholics. He chronicled his service to the Church in two autobiographies, Confessions of a Parish Priest and Furthermore!

In 1986, Father Greeley established a $1 million Catholic Inner-City School Fund, providing scholarships and financial support to schools in the Chicago Archdiocese with a minority student body of more than 50 percent. In 1984, he contributed a $1 million endowment to establish a chair in Roman Catholic Studies at the University of Chicago. He also funded an annual lecture series, “The Church in Society,” at St. Mary of the Lake Seminary, Mundelein, Illinois, from which he received his S.T.L. in 1954.

Father Greeley was a penetrating student of popular culture, deeply engaged with the world around him, and a lifelong Chicago sports fan, cheering for the Bulls, Bears and the Cubs. Born in 1928, he died in May 2013 at the age of 85.

The Faith of Our Fathers
James Gibbons

The Prospects and Perils of Catholic-Muslim Dialogue
Robert R. Reilly

The Spiritual Exercises of St. Ignatius of Loyola
Ignatius Loyola

The Spiritual Exercises of St. Ignatius of Loyola
Ignatius Loyola

A Call to Joy
Matthew Kelly