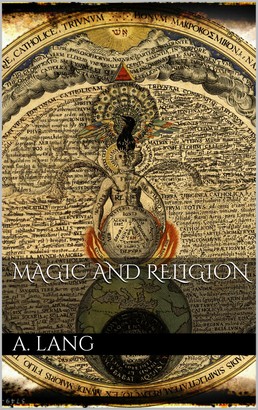 'The sin of witchcraft is as the sin of rebellion.' The idea which inspires this text probably is that a person who seeks to obtain his ends by witchcraft is rebelling against the deity or deities through whom alone these ends should be sought. Witchcraft is also an insult and injury to the official priests, who regard the witch as the surgeon regards the bone-setter, or as the geologist regards the 'dowser' or water-finder who uses the divining-rod.
Magic or witchcraft falls into two main classes. The former is magic of the sort used by people who think that things accidentally like each other influence each other. You find a stone shaped like a yam, and you sow it in the yam plot You find a stone like a duck, and expect to have good duck-shooting while you carry the stone about in a bag. In the same way the part influences the whole; you burn some of a man's hair, and so he catches a fever. Imitation works in the same manner; you imitate the emergence of grubs from the larvæ, and you expect grubs to emerge.
All magic of this kind is wrought by material objects, sticks, stones, hair, and so forth, which sometimes have been 'charmed' by songs chanted over them. Among the Arunta of Central Australia, in many respects a backward people, we do hear of an 'evil spirit' influencing the material object which has been charmed.[1] We also hear of spirits which instruct men in medical magic. But, as a rule, the magic is materialistic. It really does produce effects, by suggestion: a man dies and a woman is won, if they know that magic is being worked to kill or woo.
The second sort of magic acts by spells which constrain spirits or gods to do the will of the magician. This magic involves itself in religion when the magical ceremonies are, so to speak, only symbolic prayers expressed in a kind of sign-language. But if the idea is to put constraint by spells on a god or spirit, then the intention is magical and rebellious. Though the official priest of a savage god may use magic in his appeal to that deity, he is not a wizard. It is the unofficial practitioner who is a witch, just as the unqualified medical practitioner is a quack.

Andrew Lang (1844 – 1912) was a collector of fairy tales and folklore from around the world. Between 1889 and 1910 he published a dozen books known as the coloured fairy books. He was also a historian and wrote hundreds of essays and short-stories. He died at age 68.

The Initiates of the Flame
Manly Palmer Hall

History of the Cabala
Bernhard Pick

The Temple of Wisdom
Franz Hartmann

The Hermetic Codex of the Illuminati
Karl Eckartshausen

The Magus. Book I
Francis Barret

The secrets of the Zohar
Nurho De Manhar