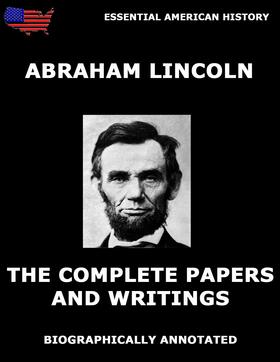 The Complete Papers And Writings Of Abraham Lincoln

Buchbeschreibung zu „The Complete Papers And Writings Of Abraham Lincoln“

This edition includes an extensive and hard to find Lincoln biography by Professor John Frost, L.L.D.

It contains the seven original volume with Lincoln's works from 1832 through 1865.

"I have endured," wrote Lincoln not long before his death, "a great deal of ridicule without much malice, and have received a great deal of kindness not quite free from ridicule." On Easter Day, 1865, the world knew how little this ridicule, how much this kindness, had really signified. Thereafter, Lincoln the man became Lincoln the hero, year by year more heroic, until to-day, with the swift passing of those who knew him, his figure grows ever dimmer, less real. This should not be. For Lincoln the man, patient, wise, set in a high resolve, is worth far more than Lincoln the hero, vaguely glorious. Invaluable is the example of the man, intangible that of the hero.

And, though it is not for us, as for those who in awed stillness listened at Gettysburg with inspired perception, to know Abraham Lincoln, yet there is for us another way whereby we may attain such knowledge-through his words-uttered in all sincerity to those who loved or hated him. Cold, unsatisfying they may seem, these printed words, while we can yet speak with those who knew him, and look into eyes that once looked into his. But in truth it is here that we find his simple greatness, his great simplicity, and though no man tried less so to show his power, no man has so shown it more clearly.

A Joosr Guide to... Unfinished Business by Anne-Marie Slaughter