PAUL McGEOUGH is a former editor of The Sydney Morning Herald, and is now its New York-based writer-at-large. He has been a reporter for almost 30 years, covering international conflict since the 1990-91 Gulf War. McGeough's work has earned Australia's highest journalistic honours, including the Perkin and the Walkley Awards. His reporting on Afghanistan won a prestigious SAIS Novartis international award in 2001. 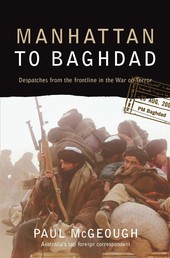 Despatches from the frontline in the War on Terror