Jackie Mac Donncha was born in August 1946 in Cill Chiaráin, Conamara, Co. Galway, where he still resides. His first poems to be published were included in the book An Chéad Chló published by Cló Iar-Chonnacht in 1997. He writes poetry, stories and songs, and had songs included on the Réalta album, produced annually by RTÉ Raidió na Gaeltachta, in 1995 and 1996. His first anthology of poetry, Gaineamh Séidte, was published by Cló Iar-Chonnacht and this is his first novella. 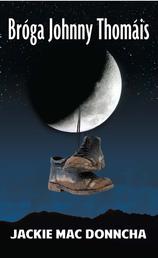