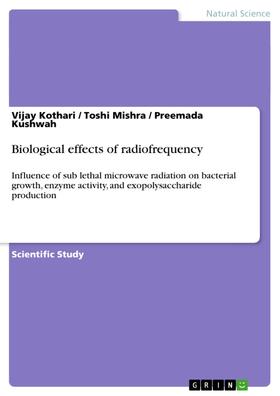 Scientific Study from the year 2013 in the subject Biology - Micro- and Molecular Biology, grade: A, Nirma University (Institute of Science), language: English, abstract: Increasing applications of MW radiation has led to concerns globally due to the suspected bio effects associated with its exposure. Effect of MW, thermal and/or athermal, is inconclusive, complex, and controversial in literature. Thermal effect causes thermogenic effect while athermal effects are other than heat and such effects reported as somatic effect and/or genetic effect.
This study basically deals with the athermal effects and is aimed at investigating the hypothesis that the exposure of microbial cells to MW (low power) may cause athermal effect, which affect on growth of microbes, enzyme activity, and production of exopolysaccharides. Furthermore, we have also checked the effect of different intracellular enzymes on MW treated bacteria. Our study also gives information that MW athermal effects causes changes at genetic level and can be passed on to next generation.

There are numerous and increasing applications of MW energy and technology in the industries, in homes, in medical, research institutions etc., and there is greater awareness and concern of the public over the suspected potential health hazards associated with such exposures [ICNIRP Guidelines, 1998]. There is therefore, a need for deeper understanding of the bio-effects of exposure to this radiation. Due to the ease of handing them in laboratory, microorganisms can be conveniently used to study the effect of MW on living systems. Besides, employing mutagenic frequencies of MW radiation for microbial strain improvement can be of considerable industrial significance.

1. To investigate the effect of low power MW on,
a. Growth
b. Extracellular enzyme (amylase and pectinase) activity in Bacillus subtilis, Streptococcus mutans and Pectobacterium carotovora.
c. Exopolysaccharide (EPS) in S. mutans and Xanthomonas campestris.

2. To study the effect of low power MW on,
a. Growth
b. Protein synthesis
c. Intracellular enzyme (Glucose-6-phosphatase and β- galactosidase) activity
3. To investigate mutagenic effect of MW on EPS production in X. campestris.

The "Twinless Twin". The Passing of a Twin and its Effects on the Twin that Survived
Otivia Headley