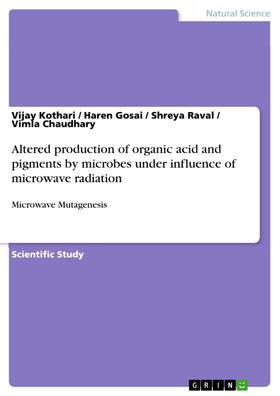 Scientific Study from the year 2014 in the subject Biology - Micro- and Molecular Biology, grade: A, Nirma University (Institute of Science), course: M.Sc., language: English, abstract: This study attempted at microwave mutagenesis of: (i) Lactobacillus plantarum for lactic acid overproduction, and (ii) Streptococcus mutans for reduced lactic acid production. Lactic acid is among the microbiological products with high market potential. Lactic acid is also an important virulence factor in formation of dental caries by S. mutans, as the acid produced by the bacteria leads to demineralisation of the teeth. Two of the mutants obtained (one from each organism) were able to maintain the altered lactic acid production till 10 generations. However the magnitude of alteration in lactic acid producing ability of the mutants went on decreasing over generations. The microwave effects observed in this study seem largely to be athermal in nature. Investigation of the mutants obtained at molecular level may result in identification of novel mutations responsible for altered lactic acid production. These mutations can then be introduced into a suitable organism either for better industrial production of lactic acid, or for constructing new probiotic strain(s) for possible application in maintenance of oral health.

Effect of low power (90 W) microwave (2,450 MHz) radiation on bacterial growth and pigment production was studied in three different bacteria. Microwave exposure of 2-6 min duration was able to alter growth and pigment production (prodigiosin production by Serratia marcescens, violacein production by Chormobacterium violaceum, and staphyloxanthin production by Staphylococcus aureus) in the test organisms significantly. In this study, pigment production was estimated in the cell population originated from microwave treated inoculum, and not directly in the MW treated cells. Thus the alterations in pigment production and/or secretion might have been transferred from the originally MW treated cells to their daughter cells (who did not receive direct MW exposure), indicating the mutagenic influence of microwave radiation. Heavy prodigiosin overproduction observed in one of the test tubes inoculated with microwave treated S. marcescens could not be sustained by daughter populations corresponding to that tube, indicating the reversible nature of microwave induced mutation(s). The microwave effects observed in this study largely seem to be of athermal nature, as the thermal effect was minimized by use of ice during the microwave treatment.