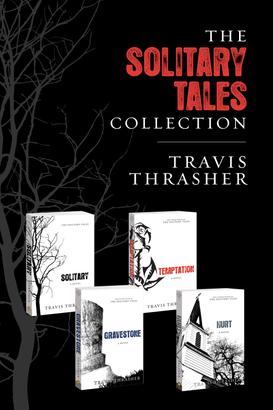 Solitary, North Carolina is one of those small towns in the Smoky Mountains that could easily be overlooked. Yet Chris Buckley can’t overlook anything since he’s just moved there and fallen for the wrong girl. He’s made enemies with the wrong people. He’s starting to have nightmares about very, very wrong things. Something is happening in this creepy little town, and it seems to somehow center around Chris. A four-book YA series that will keep you up at night and make you wonder about its mysteries to the very end.

#1 Solitary: When Chris Buckley moves to Solitary, North Carolina, he faces the reality of his parents’ divorce, a school full of nameless faces—and Jocelyn Evans. Jocelyn is beautiful and mysterious enough to leave Chris speechless. But the more Jocelyn resists him, the more the two are drawn together. Chris soon learns that Jocelyn has secrets as deep as the town itself. Secrets more terrifying than the bullies he faces in the locker room or his mother’s unexplained nightmares. He slowly begins to understand the horrific answers. The question is whether he can save Jocelyn in time.
This first book in the Solitary Tales series will take you from the cold halls of high school to the dark rooms of an abandoned cabin—and remind you what it means to believe in what you cannot see.
#2 Gravestone: At first, Chris Buckley was simply warned. And watched. But as Chris unravels the haunting riddles of the town of Solitary, he finds that much more than the life of a town is at stake. Whether facing a pastor with a house full of skeletons or a cousin he never knew existed, Chris is forced to choose between light and darkness, life and nightmarish death. Every choice he makes reminds him that the unthinkable has already happened—and if he trusts the wrong person, it may happen again.
This second book in the Solitary Tales continues Chris’s journey toward finding out who he is and what his own role is in the darkness suffocating his tiny new hometown. Filled with shocking twists, Gravestone is a tale of a teenager thrown into a battle over a town, a secret—and ultimately his own soul.
#3 Temptation: The third book in the Solitary Tales series for young adults, Temptation follows the soul-wrenching twists of Chris Buckley’s journey as he heads deeper into a darkness that threatens all he loves best. As a reluctant student at Harrington High’s summer school, Chris meets a fun-loving senior girl who offers a welcome diversion from Chris’s past. Soon Chris no longer searches for the truth about the town of Solitary. He no longer tries to pierce its shadows. He no longer questions his role in its mysteries. He makes a new choice: he runs. What he doesn’t realize is that he’s running the wrong way—and is very close to being beyond any choices at all.

#4 Hurt: When Chris Buckley first encountered the mysteries of creepy Solitary, North Carolina, he had little idea how far he would fall into the town’s shadows. After losing the love of his life, Chris tried to do things his way. He hunted answers. Then he gave up trying to find them. But now Chris comes back to Solitary knowing there’s a purpose for his being there. As he watches his place in a twisted and evil bloodline become clear, Chris waits for the last battle—and wonders who will be left when he finally makes his stand.
The fourth and final book in the Solitary Tales shines light into deep darkness as Chris’s journey to Solitary comes to a dramatic close.

The Special Ones
Em Bailey

The Girl in the High Tower
Gennifer Albin