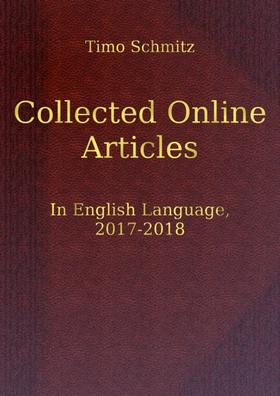 This book contains most English-language articles that were once published online by Timo Schmitz between 2017 and 2018, including the first five chapters of the book of Genesis, which he translated from Hebrew and commented. Timo Schmitz (*1993) is a language fanatic, philosopher, journalist, poet and book author. He is known for his “New Constructivist Communism”, a political philosophy which questions contemporary society, morality and thinks of alternative forms of living. His works in 2017 and 2018 broadly cover religions, as he investigated many indigenous religions and uses their wisdom in his philosophical writings. In 2017, he gave an analysis on a popular North Korean religious cult in which he shows the strong connection between that religion and the government line. In 2018, he dedicated a lot of attention on Judaism, but also wrote first articles including Islamic views. In thee two years, he thought a lot about God and belief issues and it is the point where he turned from an atheist into a theist, thus a major changing point in his philosophical journey.

The Religion of Experience
William Call