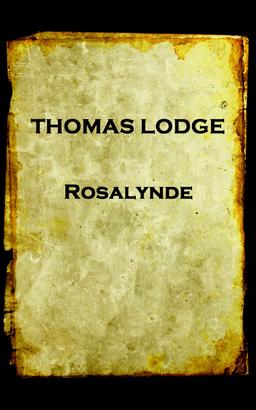 As can be easily understood presenting an exact chronicle of the facts in the life of a 16th Century playwright is often difficult. Thomas Lodge is no exception. Thomas Lodge, born around 1558 in west Ham, was the second son of Sir Thomas Lodge, the Lord Mayor of London, and his third wife Anne. Lodge was educated at Merchant Taylors' School and thence to Trinity College, Oxford; taking his BA in 1577 and his MA in 1581. Lodge, disregarded his parents career wishes in order to take up literature. When the penitent Stephen Gosson published his Schoole of Abuse in 1579, Lodge responded with Defence of Poetry, Music and Stage Plays (1579 or 1580). His pamphlet was banned, but appears to have been circulated privately. Already in 1580 Lodge had published a volume of poems entitled Scillaes Metamorphosis, Enterlaced with the Unfortunate Love of Glaucus, also more briefly known as Glaucus and Scilla. Lodge seems to have married his first wife Joan in or shortly before 1583, when, "impressed with the uncertainty of human life", he made a will. That his family viewed his conduct at the time with disdain may be noted by the absence of his name from his father's will in 1583. The marriage of Lodge and Joan produced a daughter, Mary. However, without an income from his family Lodge would have to provide it by other means. The debate in pamphlets between Lodge and Gosson continued with Gosson’s Playes Confuted in Five Actions; and Lodge retorting with his Alarum Against Usurers (1585)—a "tract for the times". That same year, 1585, he produced his first tale written in prose and verse, The Delectable History of Forbonius and Prisceria. Lodge appears to have been at sea on a number of long voyages. Usually these are described as ‘freebooting voyages’, an interchangeable term also used for piracy and plunder. Many nations endorsed these tactics and it seems fairly safe to suggest that these voyages were a source of revenue which would keep Joan and Mary with their heads above water. These long voyages also provided something else that Lodge would have been keen to gather and usefully use; time. During the expedition to Terceira and the Canaries (around 1586), to set aside the tedium of his voyage, Lodge composed his prose tale of Rosalynde, Euphues Golden Legacie, which, printed in 1590, would later be used by Shakespeare as the basis for As You Like It. Before starting on his next voyage, this time to South America, Lodge published a historical romance, The History of Robert, Second Duke of Normandy, surnamed Robert the Devil; and he left behind him for publication Catharos Diogenes in his Singularity, a discourse on the immorality of Athens (London). Both appeared in 1591. By now Lodge was on a voyage with Thomas Cavendish to Brazil and the Straits of Magellan and would only be able to return home in 1593. Whilst he was travelling another romance in the manner of Lyly, Euphues Shadow, the Battaile of the Sences, appeared in 1592. At either end of this voyage Lodge appears to have worked on some dramas, most notably with Robert Greene. It is thought that in 1590, together with Greene, he wrote A Looking Glass for London and England (published 1594). He had already written The Wounds of Civil War (produced perhaps as early as 1587, and published in 1594, and put on as a play reading at the Globe Theatre on 7 February 1606), a good second-rate piece in the half-chronicle fashion of its age. His second historical romance, the Life and Death of William Longbeard (1593), was more successful than the first. Lodge also brought back with him from the new world voyage A Margarite of America (published 1596), a romance between a Peruvian prince and a daughter of the king of Muscovy interspersed with many lyrics. The composition of Phillis, a volume and an early sonnet cycle sequence (an increasingly popular format in Elizabethan times), was published with the narrative poem, The Complaynte of Elsired, in 1593. A Fig for Momus was published in 1595 and gained him the accolade of being the earliest English satirist. This work contains eclogues addressed to Daniel and others as well as an epistle addressed to Michael Drayton. In the latter part of his life—possibly about 1596, when he published his Wits Miserie and the World's Madnesse, which is dated from Low Leyton in Essex, and the religious tract Prosopopeia (if, as seems probable, it was his), in which he repents of his "lewd lines" of other days—he became a Catholic and engaged in the practice of medicine, for which Wood says he qualified himself by a degree at Avignon, in France, in 1600. Two years later he received the degree of M.D. from Oxford University. Early in 1606 he seems to have left England, to escape the persecution then directed against the Catholics; and a letter from him dated 1610 thanks the English ambassador in Paris for enabling him to return in safety. At some point in his later life Lodge appears to have married again. This time to Jane Aldred, the widow of Solomon Aldred, at one time a Roman Catholic agent of Francis Walsingham in Rome. From the early 1600’s Lodge appears to have written or published sparingly. His later works include A Treatise of the Plague (1603) and two major translations—The Famous and Memorable Works of Josephus (1602) and The Works of Lucius Annaeus Seneca (1614), both of these went through several editions. Obviously with his conversion to the Catholic faith life would have been difficult and most accounts agree that he withdrew from a literary life and instead concentrated on his work as a doctor. Over the years he was increasingly recognized as a distinguished physician and finally worked from Old Fish Street in the parish of St. Mary Magdalen. Thomas Lodge died in London, most probably during an outbreak of the plague, in 1625.