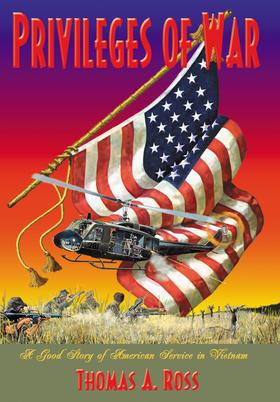 A Good Story of American Service in Vietnam

Privileges of War is a collection of positive stories about wartime service during one of the most negative and controversial periods in American history. While the stories told here are relatively simple and straightforward, they are also powerful, with the potential of changing viewpoints, opinions, and even lives.

Soldiers did not commit the U.S. military to war in Vietnam. However, they did bear the brunt of that commitment on both foreign battlefields and in their own hometowns when they returned. Not only did they fight battles against an enemy who hated them, but upon returning home they often faced countrymen who seemed to hate them as well.

Events of September 11th bound our country together, while events surrounding the Vietnam War nearly tore it apart.

Few Americans who served in Southeast Asia were pot smoking, cursing, killing machines, as they have too often been portrayed. The great majority of the more than three million men and women who spent time in Vietnam were decent people who either felt they were fulfilling their patriotic duty or simply believed they were serving their country. Most of them were young, either still in or scarcely out of their teens when they were asked to shoulder heavy responsibility and face life-and-death situations, some of them on a daily basis. I know, I was there  I was one of those soldiers. Privileges of War is a firsthand account of the many acts of selfless heroism and courage I witnessed during my tour of duty as a military advisor in Vietnam.

Many books currently available about the Vietnam War tell provocative stories with messages that are often dark and brooding. And, while there were without question many repulsive and brutal occurrences in Vietnam, with the atrocities at My Lai being perhaps the most notorious, this book dares to tell a very different story about the war in Vietnam and those who served in it. Privileges of War treats neither the politics of the war nor the conflict itself, but depicts some of those who were there and presents the spirit lifting manner in which they served. It is a detailed, action-filled account that will give readers a real, often frightening, idea of what it was like to be on the ground, or in the air over the Vietnamese jungle during that conflict.

PART I of this book documents day-to-day life in Vietnam, which could be both gut wrenching and exhilarating. PART II presents the obscure and relatively unreported story of the "Rescue in the Valley of the Tigers." The story of the rescue recounts a life saving mission mounted by a small group of daring Americans determined to give the gift of freedom to inhabitants of a mountain village who had been held and used as slaves for more than eight years. It is an American story of resourcefulness, integrity and courage that demonstrates the true nature of those who represented our country on the Vietnam battlefield.

While this book shares many bright stories of the dedication and patriotism that the author was privileged to witness in Vietnam, they are not presented as a goody-goody gloss over of ugly occurrences that took place there. They are, however, offered as a vital piece of the American historical puzzle that has been missing.

Privileges of War was written to honor those who served. And, especially for the wives, mothers, children, other relatives, and friends  or anyone who knows a Vietnam veteran who would like a different perspective. One needs no military experience to understand and follow the stories in this book. One simply needs an interest.

In at the Kill
Alexander Fullerton