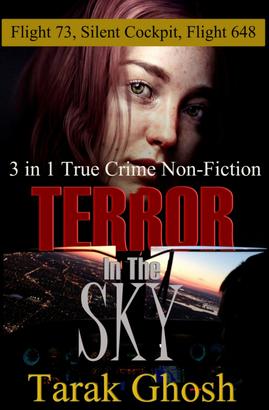 Terror in the Sky

Beschreibung zu „Terror in the Sky“

The Inner Stories of two hijacked aircrafts and a missing aircraft.
A collection of three non-fictions (Silent Cockpit, Flight 73 and Flight 648) under one cover
Silent Cockpit: 'Silent Cockpit' is a non-fiction, based on the mysterious missing of Malaysian Flight MH 370 that had left behind a series of unanswered question. On March 8, 2014, the Malaysian Airlines MH370 had been 'vanished' from the sky and it has become one of the world's greatest aviation mysteries.. After five years no one can sayexactly what happened to the ill fated aircraft. This book has tried to find the answers behind the mysterious missing of Flight MH 370.
Flight 73: 'Flight 73' is a non-fiction, based on the true events that had happened on 6th September, 1986 while Pan-Am Clipper 73 was hijacked on the ground in Karachi, Pakistan. Nearly 361 passengers, ground crew and 13 flight attendants spent 16 hours as hostages of the terrorists. When the 747's alternate power system f

The Hell of Mumbai
Thomas Rupp