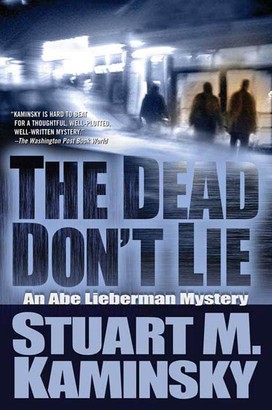 The Dead Don't Lie is the latest in Edgar Award winner and MWA's Grand Master Stuart Kaminsky's Abe Lieberman mystery series. Lieberman and his partner, Bill Hanrahan, are hell or heaven bent on making the mean streets of Chicago just a little safer.

As usual they have their hands full. Three prominent members of the Turkish community are all brutally murdered and Lieberman works to find out what, if anything, ties these murders together. It doesn't help that the key to the puzzle might be an event that took place over a century ago.

Bill Hanrahan finds himself assigned to a case where a hospitalized chef claims to have been beaten by two people and shot by a third, a bespectacled Chinese man. As Bill digs deeper he finds himself at odds with an old nemesis, a man who has an unusual affinity for Bill's Asian wife.


Both men struggle to do the right thing even if it means bending the letter if not the spirit of the law.

Not Quite Kosher
Stuart M. Kaminsky