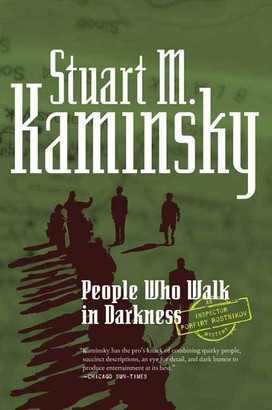 People Who Walk In Darkness

After a very long absence, Forge is delighted to be bringing back one of Edgar award winning Stuart Kaminsky's best loved characters, Inspector Porfiry Petrovich Rostnikov. Rostnikov is a Russian bear of a man, an honest policeman in a very dishonest post-Soviet Union Russia. Known as "The Washtub," Rostnikov is one of the most engaging and relevant characters in crime fiction, a sharp and caring policeman as well as the perfect tour guide to a changing (that is, disintegrating) Russia. Surviving pogroms and politburos, he has solved crimes, mostly in spite of the powers that be that rule his world.

In People Who Walk in Darkness, Rostnikov travels to Siberia to investigate a murder at a diamond mine, where he discovers an old secret…and an even older personal problem. His compatriots head to Kiev on a trail of smuggled diamonds and kidnapped guest workers…and what they discover leads them to a vast conspiracy that not only has international repercussions but threatens them on a very personal level.


People Who Walk in Darkness is a fast-paced novel of modern Russia told by one of mystery's finest storytellers.

A Whisper to the Living
Stuart M. Kaminsky

Before He Takes (A Mackenzie White Mystery—Book 4)
Blake Pierce

The Man Who Killed His Brother
Stephen R. Donaldson